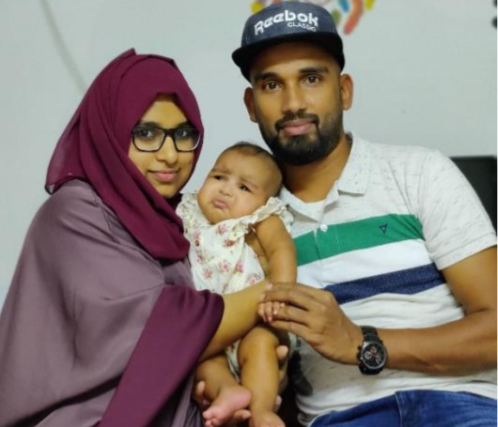 August is SMA Awareness month. On the 23rd of this month, it is also the second Memorial Day of my first baby.

The greatest joy came into our lives four years after we got married! Pregnancy was quite normal without any complications. Therefore, only the necessary tests were performed. Everything was normal including childbirth (induced labor). It was a boy. After his birth, he cried and played with his hands and feet drank milk well. When we first took him home, we were in newborn bliss. Just absolutely in love with him. He was a great baby. After few weeks, we noticed that his movements were reduced and that he cannot lift or control his head even for a little while. Moreover, we observed some abnormalities in his legs and breathing pattern also. The movement of the hands was not significantly affected at first. There was not enough sound when he cried and was very floppy. But there was also laughter and he played with us. We consulted the nearest pediatrician. He said, “The baby does not seem to be normal. 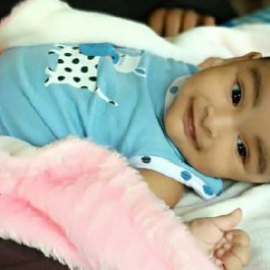 I have a suspicion that it is SMA. It’s better to consult a pediatric neurologist soon.” It was then that I first heard of SMA. I searched it on google that Spinal muscular atrophy, also known as SMA, is a genetic disease that causes infants’ muscles to waste away, potentially killing them before age 2 and type 1 SMA, the most aggressive and severe form of the disease which leaves them nearly unable to crawl, swallow, or even breathe.SMA is an inherited disorder stemming from a defective gene that leads to the death of nerve cells responsible for moving the muscles that allow us to walk, talk, breathe and swallow This is a summary of information found on Google. We were totally devastated, Reading the words, ‘most infants don’t make it to their second birthday’ just broke our hearts, especially as parents of a newborn who seemed so healthy.

And soon, gone were the days of praying every moment that it would not be SMA. Within a week, we consulted a pediatric neurologist at Amrita Hospital. The doctor suggested me to do an electromyography at first, but the result was not a favorable one. It is one step closer to SMA. The next step was to have a genetic test and here, all the prayers failed and the SMA positive was confirmed! The doctor was so helpless. There is currently no cure or available treatment (Spinraza was not approved in India at that time – it was available for an amount that the common man could never even think of)! All he could do was suggest physiotherapy and take maximum care of the baby. We should be very careful even in feeding. Choking is quite common in such babies and it may seriously affect the tongue and internal organs. This may cause difficulty in swallowing and breathing. Due to the inability to sneeze and cough so forcefully, the risk of getting lung infection is also extremely high. We kept the baby as safe as possible from infection after that. There was nothing more we could do for my son.

After 4 months constipation began. Suppositories were used. Hypotonia started to get worse. The neck became difficult to turn to either side. The leg became very immobile. The movement of the hands also decreased. It was very difficult to pick up the baby because of floppiness.

After 5 months, he began to experience more difficulty in breathing. We were visiting the hospital regularly. The nebulizer was mostly used for breathing difficulties and oxygen levels in the lungs were monitored using a pulse oximeter. The cold came from time to time and then after a couple of weeks aspirational pneumonia developed. At first the doctors had warned that pneumonia can sometimes be reversed with antibiotics, but there is nothing more they can do. The medicine may be accepted by his body and if not, he will need to be switched to a ventilator so that with the help of some machines it may be possible to stay alive for a few more days. But it cannot be recommended when no proper treatment is available, and the condition does not improve. Then we had to decide with great difficulty to not bother putting the baby in such a condition. We had to sign a consent letter in the hospital that the ventilator would not be used, and the doctors did their best to save his life. My baby’s last 3 days were in the MICU. And on August 23rd my son said goodbye to this world!

The genetic test revealed that my husband and I are SMA carriers. So, there is a 25% chance of a baby with SMA in every pregnancy. There are two ways – either try a normal pregnancy and have a CVS test at 12 weeks or have amniocentesis at 16 weeks to make sure the baby is not SMA positive. If not, do IVF PGD and make sure of SMA negative baby. It was decided that a normal pregnancy was enough as it was not difficult to conceive.

Exactly one year later, the next happiness came into our lives. I became pregnant and the second pregnancy was in Dubai. After losing my first child, I became almost an introvert. For the first three months, bed rest was prescribed by my gynecologist because of some uterine bleeding found during first scan. Subsequent scans were all normal and after 17 weeks, we came back to our homeland and had an amniocentesis which takes 6 weeks to give the result. The result was SMA negative (baby is normal). All the tests like Double marker, Fish test, NT test, and Anomaly scans were done to ensure our baby is healthy. The baby’s movements, heartbeat and other activities were normal on all scans. At 36 weeks, the amniotic fluid level was close to border line and was induced after 37 weeks to avoid any kind of risk. There was nothing wrong with the delivery and the baby cried immediately and was normal. It is a baby girl.

Within 24 hours, she passes meconium and urine. There is enough sound when crying and she had enough strength. The blanket would be knocked over with her foot, and she turned automatically on both sides. She always put her finger in her mouth and slept 15-20 hours. At the first month’s checkup, everything was normal, and she was an active baby. There was nothing to worry.

But within a week, everything turned upside down. The movement seemed to slow down. By then, the social smile had begun. There was eye contact. The amniocentesis was done which ensures 95-98% accuracy, so we thought it might not me SMA and observed her for another week. But this time the same situation was repeated. We went to the hospital and the pediatrician said, “Your observation is correct, the baby feels a little weak.” He was immediately referred to a pediatric neurologist. He suggested the SMA test first based on the previous baby’s case history and existing findings. He himself took the initiative and conducted the test for free. It was SMA positive this time too! It was certain that the result of the test would be positive by the time it came out. But the situation has changed a bit from 2 years ago. There is treatment. The doctor was ready to help as much as he can at any time. He suggested 3 ways: first was Zolgensma – Gene therapy (gene that is inserted directly into a cell usually does not function) that cost about 15 crore Indian rupees (2.1 million USD), second was Spinraza injections every four months (approximately Rs. 85 lakhs per injection) and third was Risdiplam. Gene therapy is available through the lottery system to 100 children in a country where no other treatment is available for babies up to 2 years of age and satisfying some medically possible conditions. It is just a test of luck. It is difficult to get Spinraza even through charities. We also applied for Risdiplam through preapproval access program. But the disease was diagnosed when the baby was one and a half months old and now the baby is four months old and has not received any treatment till date. It is an extremely difficult illness to rescue babies with each passing day. Yet there are many more barriers to getting treatment. The baby is getting weaker day by day. I do not know how long we can keep her safe without having any infection. However, I am still trying with hope.

Let there be a more accessible treatment method. May the days of good hope come when you hear that you are an SMA patient and everything does not seem to be over. SMA patients should also live with us!